Living in a bowl makes sense??

I went web surfing yesterday and ran into an article by an apparently prejudice guy whom I think hasn't thought everything through. He was obviously ant-Semitic and with the usual for most people view of history. (Meaning he only sees history as it supports his own views and not its entirety.) Should the 9th ward of New Orleans (or lowland in St. Bernard or anywhere else for that matter) be rebuilt? From a true historical perspective, I would say no. The same no I said years ago before the coastal development around Florida put literally millions of people in the path of destruction from the hurricanes that are bound to come. (Not to mention the rising ocean, global catastrophe etc.)

But what will come will come. Rebuild it if you must.

I know the call of home and have answered it myself. But you have to rebuild it with the thought in mind that any structure you put up is in reality a temporary thing. Nothing (shy of God's grace) last forever. Does Stonehenge look the same as it did two millennium ago. I think not. Will the 9th ward flood again? I'm willing to wager it will. The Army Corp of Engineers are not up to the task of designing a system better than the one nature was working on till they interfered with it.

Get real people. New Orleans was built in a place that nature intended to flood many time over in order to build up the land. The same flooding is designed to build up the coastline of Louisiana. Those people who are building big houses and such in the Atchafalaya basin had best take notes on the 9th ward because they will shortly find themselves looking for the same boats to rescue them. If you want to live in these type of places, fine, but don't be holding your hand out for federal funds while you cuss the state. You chose it and you should be the ones to pay for it.

Sleep in the bed you make.
From the heart and mind of The Louisiana Bayou Rat at 4:31 AM No comments: 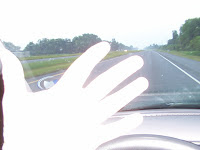 Is it real or is it imagination? Which way do you see it. The basic premises underlying the thought came from where? Is it art?? Would you call it Hi Fi or stereo or HD? Does it really matter?

Questions all, and we'd like to know. Can the Enquirer tell us?

No. They don't know. Only God and I know for sure and I have my own doubts about my memory.

A hand of fire on the highway of life?? No, just my hand in front of the camera and the flash flashing it's brilliant whyte lyght at about six inches from the surface.

But is it art?
From the heart and mind of The Louisiana Bayou Rat at 1:44 PM 3 comments:

Same as it ever was

Same as it ever was.

One of the truest statements ever made in song. Look at Israel's rise and fall, and rise and fall, and rise and fall, and rise and fall, and rise and fall, and rise and fall, and rise and fall, and rise and fall, and what do you see? America, America and here we go again. Now the Demo's control congress and they will be careful and argue about tax cuts and taxes and other was to get your money or at least control of your money but probably won't do much about it till they have the white house behind them. (They have less than the 75% that might be required to override a presidential veto.) So more bluster and blow to put us deeper in the snow. I supposed it would be too much to hope for. A core of congressional people who actually look beyond party noise and look to the people's need and desire. Should for some reason some politician read this, what we want is less government and more purpose in what is there. You are not my nanny and you do not need to feed me with a copper and lead spoon. You should not allow people like some of the people recently elected in my home state to serve as they represent that which is broken and not that which desires to save and improve. I don't want a free handout nor do I want to fund such a thing. If I desire to render aid to someone on the street, I will do so. If I do not wish to aid them I have the right to choose to not render aid. Don't you worry about it because God will take care of me for it. (By that I mean the Creator may take me to task for ignoring one of His own.)
Who knows what the baby in the womb might become, a mass murderer or the developer of the cure for (pick your favorite disease and put it here). Or that child may grow up to be an average person who does their best to get by and never accomplishes any great thing in the eyes of the world. You don't know and neither do I, but they deserve the chance.
I've got to tell you, I voted for the president, though he isn't the best person for the job. The alternative looked like suicide to me. Kinda like Fast Eddie and the (former) fascist. The rallying campaign cry was vote for the crook, it's important. I did because the alternative wasn't much of a choice. Now don't get me wrong. I think W is adequate as a president, but he isn't a Ronald Reagan. (Who I think history will call the best president of the 20th century) I don't think we have had a really good president since Washington anyway. He impressed me as having a vision for the future where government responded to the needs of the people without taking over the lives of the people. In that regard FDR and his social programs (possibly stolen from Huey) did the most damage to the country in all of history and set us on the path to socialism. Oh for future vision I cry and see only the darkness of involuntary servitude. Free the people America, make them truly free.

But enough from the soap Box.

In case you are wondering, I don't support either of the two major parties and the smaller parties scare me just as much. I am an independent in the extreme I guess. You keep guessing too......

Same as it ever was.
From the heart and mind of The Louisiana Bayou Rat at 11:53 PM 3 comments: